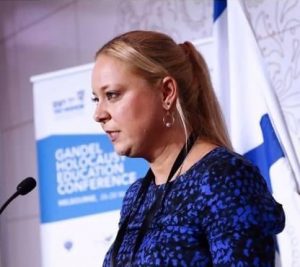 Recently, the Gandel Foundation announced that the 2021 recipient of the Gandel Award for Excellence in Holocaust Education to be our very own Stacey Moros. We congratulate Stacey on this wonderful achievement and thank her for her passion and commitment. Below is the formal announcement from the Gandel Foundation:

Stacey Moros, Head of History at St Michael’s College in Adelaide, has been selected as the recipient of the 2021 Gandel Award for Excellence in Holocaust Education (Gandel Award). The Gandel Award aims to recognise outstanding efforts of alumni of the Gandel Holocaust Studies Program in delivering Holocaust education in their schools and in the wider community. Stacey completed the Gandel Program in 2014, when she was a teacher at Tatachilla Lutheran College, and she continued implementing a range of Holocaust education initiatives ever since.

The Gandel Award was established in May 2019 during the inaugural Gandel Holocaust Education Conference held in Melbourne and is awarded annually. The award consists of a framed certificate and a $5,000 donation to be used for educational purposes. The winning teacher can use funds in school – or the broader school community – for Holocaust-related initiatives, to continue building the awareness and preserving the memory of the Holocaust and the lessons it holds for today.

On hearing the news, announced during an online Holocaust study session organised by Gandel Foundation, Yad Vashem and Adelaide and Peth Holocaust Museums, Stacey said she was ‘shocked and humbled’ by the announcement. “I am so proud. Holocaust education has definitely been my passion and I feel a strong sense of duty to teach my students about the dangers of prejudice and hate. I am so grateful to have been given this amazing opportunity to study at Yad Vashem as part of the Gandel Holocaust Studies Program back in 2014. Thanks to the Gandel Foundation for their continued generosity in supporting Holocaust education in Australia,” said Ms Moros.

CEO of Gandel Foundation, Vedran Drakulic OAM said Ms Moros was an outstanding educator. “Stacey has been involved in a broad range of Holocaust education initiatives both in her school and more broadly. She is also a regular presenter at the History Teachers Association conferences, delivering workshops on Holocaust pedagogy, and she was also involved at the Gandel Holocaust Conference in 2019. She is definitely a most-worthy recipient”, added Mr Drakulic.

Stacy’s citation notes that she received the Gandel Award “in recognition of her continuous and broad-ranging efforts in promoting, developing and delivering Holocaust education activities and initiatives”.

International Men’s Day for 2021 is celebrated on Friday 19 November. Thank you to the group of Year 8 and 10 students, including Gianni, Ruben and Luis who have worked with staff to raise awareness of the day, to Jo at the Primary campus for her kind gifts of recognition and to those involved in recent men’s health events, including Halle and Mr Spencer. The IMD group identify the main objectives of International Men’s Day to be:

An inspiring speech by Year 11 student Halle Rigney, whose family has been personally impacted by cancer, motivated the Year 11 cohort to get involved in ‘Make a Move’, a Movember initiative where people ‘move’ 60km over the month of November. That’s 60km for the 60 men we lose to suicide each hour, every hour across the world. The campaign saw a combination of Year 11 students and staff who walked or ran 1km over the course of the day, accumulating to 156km. The event cultivated a collegial spirit between the Year 11 cohort and staff to change the face of men’s health. If you would like to donate, you can access the donation link here. This will be live until the end of November.