The inaugural School Surfing Championships were held at Goolwa Beach on Friday the 17 June with St Michael’s represented in both Open Boys and Whitewater Girls events. The Open Boys qualified for the Championships by finishing in the top 50% of the draw in Group 2 of the Metro and Country school’s event.

Light offshore winds and a 2ft swell greeted the competitors with Max Wandell and Oskar Kilpatrick surfing together in a team format in the first round. Max started off strong with some high-scoring waves but ultimately, they didn’t make it through and were relegated to the repechage round. Some strong surfing got them through their repechage heat, and this moved them into round 2 up against some solid competition from the Southern Metro and Fleurieu schools. With the conditions proving tricky and not many waves coming through, a close finish had them tied for 2nd place but on a count back narrowly losing by 0.1 and just missing out on surfing in a Semi-final and finishing in 6th place overall. An excellent result for the St Michael’s Open Boys surf team showing they can compete with the best of them.

The Whitewater Girls’ event had some healthy competition with 24 girls competing from all over the State. St Michael’s was represented by Sanur McMahon, Kennedy Santos, Chloe Riley and competing for her first time, Isabella Pacicca.

The sun was out but the water was cold, and the girls hit the surf for the first heat of the day, and all caught some classic waves out in the surf. Isabella showed some great form for her first time out and they all progressed through to the next round and opted to leave their wetsuits on to try and keep warm in the chilly conditions. The girls cheered each other on from the beach and yelled out instructions for when the best waves were coming through and generally just tried to keep moving to stay warm. The girls all pushed further out the back and were rewarded with big scores for catching the larger waves and riding them all the way to the beach. Kennedy even had enough time in her heat to do a board change halfway through but the tactic didn’t pay off in the end and she was knocked out of the competition.

Sanur and Chloe made it through to the semi-finals and with the tide coming in and the wind dropping off the waves were getting better as the day went on. Sanur was unlucky not to progress through, finishing 7th overall but showed that she is very competent in the water thanks to all the years of her doing Nippers at Grange SLSC!

Chloe progressed through her semi-final and was up against some strong competition in the Whitewater Girls Final against three other competitors all from Tatachilla Lutheran College. All the girls were surfing at their best with the judges looking to reward surfers that took off on unbroken waves and performed manoeuvres on the clean face and the length of the ride. The final result had some excellent scores with Chloe taking out the White-Water Girls Championship for St Michael’s.

All competitors surfed great, and we look forward to representing the College again next year. 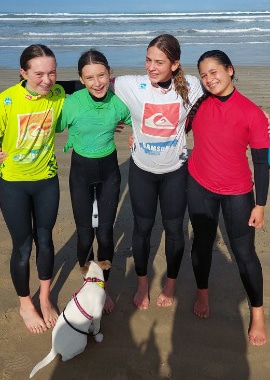 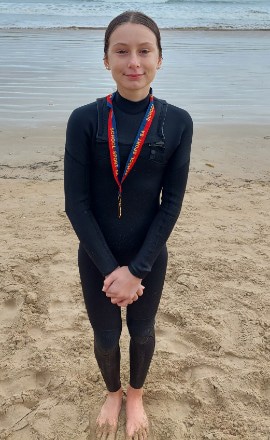