Every child matters. It’s a simple philosophy but one that lies at the heart of Catholic Education. And, at St Michael’s College in Henley Beach,it’s a philosophy that has offered hope and opportunities to a new generation of children coming to Australia from across the globe.

Since 2006, the school has provided an outreach program for a growing community of refugees from Africa, Afghanistan, Myanmar, Iraq, Pakistan and more. Now called Beyond Borders, the program supports students as they deal with the complexities of forced migration and the transition to mainstream schooling.

“Beyond Borders has grown in lots of ways,” Bron Kemp, acting deputy teaching and learning, says. “We started out with three students in 2006 and have 17 this year. We have a dedicated teacher who oversees the program and a dedicated teaching room which is open all day. We offer support lessons. Students are timetabled together as often as possible and they are provided with peer mentors, particularly when they’re new to the school.”

As well as receiving financial help to pay for school fees and uniforms, students’ families are also cared for by the school.
“At times we find ourselves working with the families if they need medical support or just being able to get their head around how the world works in Australia,” Ms Kemp says.

As a Catholic school in the Lasallian tradition, St Michael’s welcomes refugees of all faiths. “We are working with students from Islamic, Buddhist and Orthodox Christian backgrounds who have fled their place of birth to escape persecution, but it is just one community and that’s how we see it,” Ms Kemp says.

And the program’s success speaks for itself, with previous students venturing into careers including carpentry, nursing and childcare. “Others have gone on to university – it is absolutely wonderful.”

Year 12 student Rana Hussien, who arrived in Australia from Eritrea in 2017, has launched her own headscarf business to remove stigma around wearing the hijab, and is considering studying international relations at university. “Beyond Borders has opened doors that weren’t going to be opened if I had stayed in Eritrea,” she says.

Classmate Khaled Mohammed, 18, who is also from Eritrea, is taking advantage of a school-based apprenticeship to begin a career in the automotive industry. “I completed my VET course this year and am now looking for an apprenticeship,” he says. “I love fixing cars. Coming to St Michael’s has given me the opportunity to do what I love.”

Featured in the SA Catholic Schools Magazine, published in The Advertiser, August 13 2022. 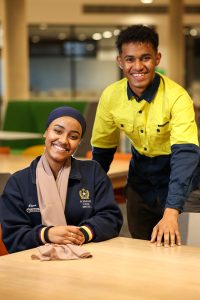 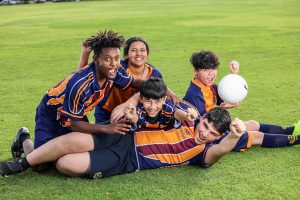